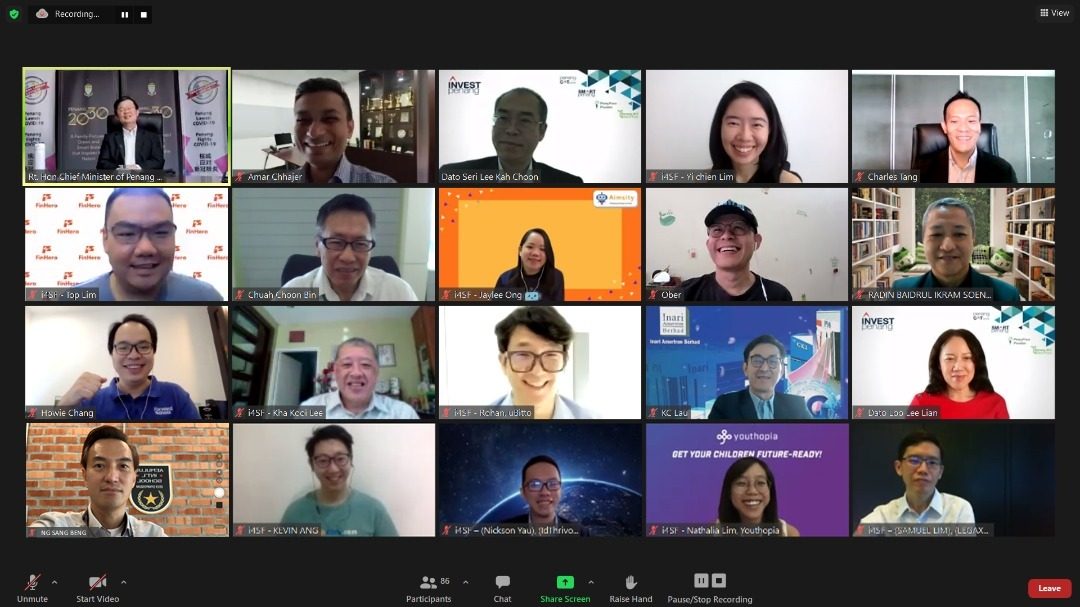 PENANG, June 18, 2021 – Embracing the development of technology and the instrumental role it plays in improving our daily lives, the Penang State government has allocated a total of RM1 million fund under Penang i4.0 Seed Fund (i4SF) Stream #3. After a rigorous evaluation amongst the applicants, 10 qualified startups have been selected and will receive funds ranging from RM50,000 to RM100,000 to help in propelling their growth and attaining commercialization.

Initiated in 2018, Penang i4SF is a special seed program by the Penang State Government to provide funding for qualified high potential technology startups, with the aim of enhancing the growth of Penang’s tech ecosystem. In the first two rounds of fund rewards in 2018 and 2019 respectively, 27 qualified companies were awarded with RM3million fund collectively. Today’s event marked the third round of fund award.

Recognizing the startups in the virtual ceremony, Rt. Hon. Mr. Chow Kon Yeow, Chief Minister of Penang and the Chairperson for i4SF Steering Committee acknowledged their potential and congratulated them for being selected under the i4SF Stream #3 cohort.

Moving forward, Rt. Hon. Mr. Chow stressed on the importance of maintaining the startups’ momentum. “Thriving in this fast-paced technology transformation journey, navigating from existing prototypes to commercialization and subsequently impact at scale requires concerted efforts. Aside from the i4SF, the State government, via InvestPenang has curated an on-going initiative, named G27, exclusively for the i4SF recipients. On top of mentorship guidance by experienced professionals, G27 also acts as a platform that links the startups with industry players, expanding their networks. Additionally, trainings and workshops by subject matter experts, covering fundraising, finance and investment, human resource, legal, software development and market expansion, among others, will be provided.”

Speaking on behalf of the State government, Rt. Hon. Mr. Chow called upon all startups to look forward for the upcoming Penang i4SF Stream #4, which is expected to launch in the near future. “In Penang, we believe that the rightful adoption of technology is capable of generating positive impacts towards the society and startups are one of the vanguards in such. We are pleased to be able to play a part and help spur innovations with this grant, materializing Penang 2030 vision of upgrading the economy, empowering the people and enhancing quality of life.”

Witnessing today’s event included Dato’ Seri Lee Kah Choon, Special Investment Advisor to the Chief Minister of Penang and Dato’ Loo Lee Lian, Chief Executive Officer of InvestPenang, who is also the Chairperson of Penang i4.0 Seed Fund Evaluation Committee. As the Chairperson, Dato’ Loo is pleased over the quality of the awarded startups. “The response we received from the startups were promising. For Stream #3, we have obtained over 100 applications throughout the one-month application period. 44 applicants that met the requirements were invited for a pitching session and undergone regimented due diligence procedures. Finally, the Committee has reached a consensus on awarding the fund to the 10 startups that have demonstrated scalability of technology and early traction. We look forward to seeing more success stories coming from our startup community.”

InvestPenang is the Penang State Government’s principal agency for promotion of investment. Its objectives are to develop and sustain Penang’s economy by enhancing and continuously supporting business activities in the State through foreign and local investments, including spawning viable new growth centres. To realize its objectives, InvestPenang also runs initiatives like the SMART Penang Centre (providing assistance to SMEs), Penang CAT Centre (for talent attraction and retention) and i4.0 seed fund (a catalyst for the startup ecosystem).