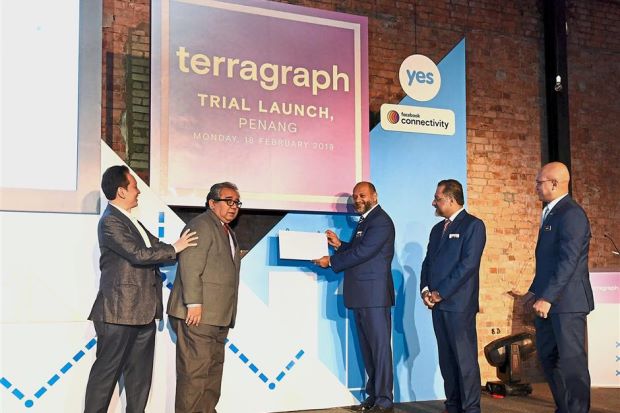 The deployment, supported by Facebook, is the first large-scale pilot market in Asia.

“Commencing on March 1, we expect the pilot to last up to six months, during which we will learn and plan for the commercial rollout while continuing to explore ways to harness this advanced wireless fiber technology,” YTL Communications CEO Wing K Lee said at the launching ceremony here yesterday.

George Town, a densely populated urban area, is also home to one of the largest collections of pre-war buildings in South-East Asia.

He also said that Facebook had produced a reference design for Terragraph hardware, including the tools and software needed to operate the technology, that would be leveraged for this pilot market.

The six-month pilot market will include the provision of public WiFi and fixed wireless access.

“The technical breakthrough in providing gigabit wireless using Terragraph is a preview of the exciting era of 5G,” Wing said.

Communications and Multimedia Minister Gobind Singh Deo, who officiated the launching ceremony, said the deployment of the technology would make Malaysia the second country in the world after Hungary to run trials for Terragraph.

He said the Terragraph pilot project was timely as it was in line with the National Fiberisation and Connectivity Plan (NFCP), that aims to solve a common urban problem where demand for high-speed broadband is high but access is lacking.

“Even though the NFCP is a fibre-first plan, it is technology agnostic.

“This means we are open to any technology to solve connectivity problems, including Terragraph technology,” he said.

Gobind said Malaysia would set a minimum speed requirement for telecommunications companies to comply. The key targets of the NFCP is to achieve an average speed of 30mbps in 98% of the populated areas and gigabit availability in all state capitals by 2023.