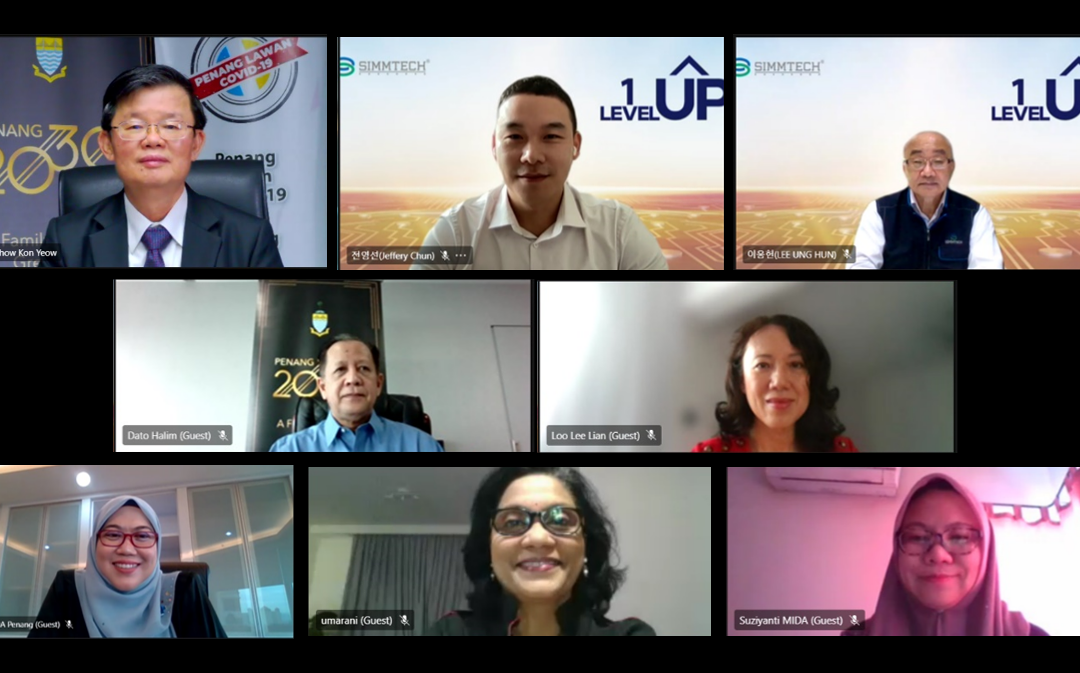 Penang, July 30, 2021 – The Penang State government is pleased to announce that Korea-headquartered Simmtech Holdings Inc. (Simmtech), one of the global leading players in printed circuit board (PCB) and packaging substrate for the semiconductor industry, has chosen an 18-acre site at Batu Kawan Industrial Park, Penang, Malaysia for its first large scale factory in Southeast Asia.

Via its Malaysian subsidiary, Sustio Sdn. Bhd. (Sustio), Simmtech’s Phase-1 investment would be US$120 million and the operation is expected to commence in the first quarter of 2022. This new facility in Penang is expected to create 1,200 high value jobs in engineering, manufacturing and quality management, by the first half of 2023.

“The state-of-the-art facility in Penang will further strengthen Simmtech’s dominant market position and to meet the heighten demand in DDR5 DRAM (Double Data Rate 5 Dynamic Random-Access Memory) as well as data storage devices and packaging substrate products,” said Jeffery Chun, Managing Director at Simmtech Southeast Asia. “Notably, our presence in Penang will be an added advantage for Simmtech in terms of the close proximity to our major customers in this region, thereby enabling greater value creation. Once in full swing, the production capacity in Penang will represent 20% of Simmtech Group’s current combined capacity in Korea, China and Japan.”

The Chief Minister of Penang, Right Honourable Mr. Chow Kon Yeow expressed his deepest gratitude to Simmtech for choosing Penang as its new site. “I am excited to welcome Simmtech, the first major Korean investor from the semiconductor industry in Penang. I am hopeful that Simmtech’s arrival is the beginning of a new chapter with Korea, one of the prominent countries in the global technology sphere,” Chow said.

“As part of the efforts to cement Penang’s position as a hub for advanced manufacturing, the State government has placed emphasis on attracting companies with strong commitments in developing cutting-edge technologies and sustainable investing. I am pleased that Penang’s well-developed ecosystem is recognized by leaders across the semiconductor value chain. Simmtech’s Sustio project will bring Penang’s industry to greater heights and further integrate Penang into the global semiconductor supply chain,” Chow added.

The Chief Minister also assured Simmtech that the State government will stay committed to ensuring smooth project implementation on the ground. He also thanked the Federal Government, particularly the Ministry of International Trade and Industry (MITI) and the Malaysian Investment Development Authority (MIDA) for their synergistic efforts together with InvestPenang in bringing in this strategic investment.

Simmtech is leading the technology evolution as a core supplier for packaging substrate to Tier-1 semiconductor customers. Notably, the company’s memory module PCB, BOC boards for DRAM package and Embedded Trace Substrate were awarded “World Class Products” by the Korean Government with the largest market share in the world. Simmtech went public in 2000 at Korea stock exchange market and is expected to reach 1.2 billion USD sales revenue this year.

About InvestPenang
InvestPenang is the Penang State Government’s principal agency for promotion of investment. Its objectives are to develop and sustain Penang’s economy by enhancing and continuously supporting business activities in the State through foreign and local investments, including spawning viable new growth centres. To realize its objectives, InvestPenang also runs initiatives like the SMART Penang Centre (providing assistance to SMEs), Penang CAT Centre (for talent attraction and retention) and i4.0 seed fund (a catalyst for the startup ecosystem).