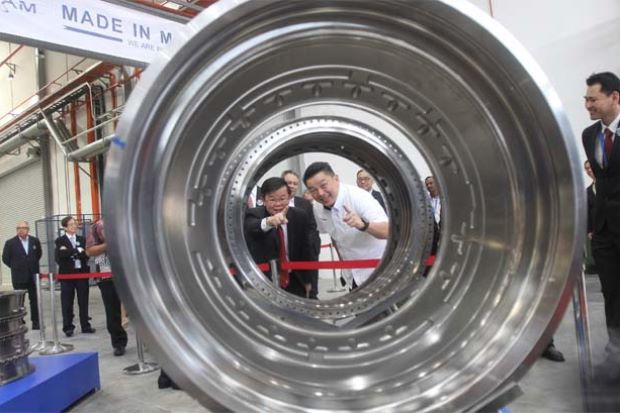 “The new 145,000 sq ft plant in Bukit Minyak is equipped with state-of-the-art precision machinery and will employ 200 highly-skilled workers when fully ramped up.

“The company’s latest manufacturing facility is its ninth, in addition to the five existing plants in Malaysia, two in Singapore and one in Thailand,” SAM chief executive officer Jeffrey Goh (pic) said.

Known as SAM Precision Sdn Bhd, a subsidiary of SAM, the facility produces major nacelle structures for A320neo and A350.

“We have an order book of RM3.1bil for engine casing and small to large aero-structures.

“The aero-space business contributes about 60% to the group’s revenue, while the equipment segment the remaining 40%.

“The prospects of the aerospace look strong despite the economic uncertainties,” he said.

Meanwhile, Tan said SAM had a revenue of RM600mil and market value of about RM1bil.

“This facility is equipped with the latest hardware. But our most important asset is our people.

On the aerospace industry, Leiking said Malaysia aimed to become the leading aerospace nation in South-East Asia by 2030.

“By then, the industry expects to generate an annual revenue of RM55.2bil and create more than 32,000 high income jobs.

“In 2017, Malaysia aerospace industry recorded a RM13.5bil revenue, of which the aerospace manufacturing segment generated 48%,” he said.

Leiking said the evolution of the aerospace industry in Malaysia had been impressive and the potential was enormous.

“Airbus and Boeing have forecast that more than 40,000 new aircraft would be needed by 2037 and out of the number, 16,000 aircraft are for the Asia-Pacific region. This will require a strong ecosystem support for aerospace manufacturing and maintenance, repair, and overhaul activities,” he added.

Leiking added that the total investments for 2018 in Malaysia would be announced on March 14.

On investments, Chow said Penang hoped to generate RM5bil in manufacturing investments for 2018.

Up to September 2018, the manufacturing investments for Penang totalled RM3.8bil.