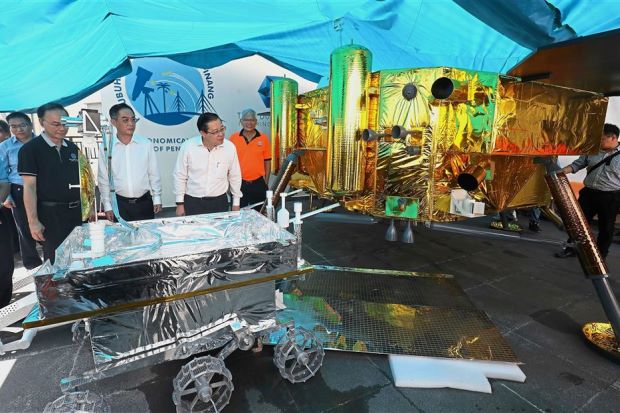 YOU probably have read about China’s space missions or even seen them on television. Now is the chance to get a rare insight into its aerospace programme at the Space Exploration Gallery at Tech Dome Penang.

The China Science and Technology Museum has brought space models worth about RM1mil for the gallery in July. They are four rockets and two spacecraft models.

Chang’e 3 is China’s first lunar surface exploration mission using a lander and rover, and in 2013, performed the nation’s first-ever soft landing on the moon.

Tech Dome Penang chief executive officer Dr Khong Yoon Loong said they were first told they would only get one rocket.

“Before we knew it, they said they were bringing four rockets and two spacecraft.

“We are very happy about it as we only planned for one rocket so now, we are making preparations for the display to cater to four rockets and two spacecraft.

“During the launch sometime in July, there will be a sharing session by professionals from China on the China Space Programme as well as workshops.

“Each one of these rockets tells a story of China’s space exploration and these are great stories, from where it started to now.

“China has landed a craft on the moon.

“This is remarkable progress and we are very proud to have this here with us,” he said at the preview of the space models at Tech Dome Penang in Komtar on Sunday.

Finance Minister Lim Guan Eng who was guest of honour said the two years of planning has now become a reality.

“We thank the Chinese govern­ment for giving us the space models as they are very expensive, costing almost RM1mil.

“It is a very good opportunity for children who love space to experience the models firsthand,” he said.

Also present was Consul-General of China to Penang Wu Jun, among others.