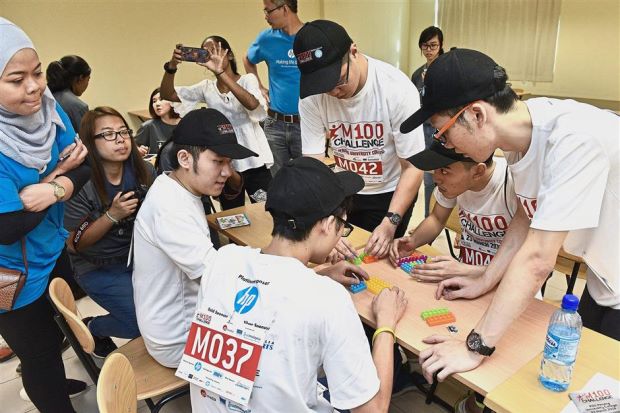 GEORGE TOWN: About 600 graduating students at a job fair here were subjected to a new era of talent scouting whereby they had to solve 10 mental and physical challenges.

Among them was how to build shockproof armour for an egg with only straws and sticky tape as well as how to build a prototype model of a structure by just observing and visualising it.

The students wore serial numbers like mara­thon runners and when recruiters spotted students with exemplary leadership or problem-solving skills, they took note of it and checked on their resumes later.

“It’s a new age of recruitment where you are tested on your soft skills, as companies want to know how you solve problems, what your skills are and how you manage a team,” said KDU Penang vice-chancellor Dr Chong Beng Keok on the two-day job fair at the campus which ended yesterday.

Participants took part in a barrage of team-building games designed by recruiting companies.

“It’s a test of skills, ability to lead a team, problem-solving and crisis management which has usurped the usual desk and chair interviews.

“Gone are the traditional recruiting style of only looking at one’s academic qualifications as the real world out there tests you on your hands-on skills and how you use them to face challenges,” said Dr Chong.

Thirty-five companies, which are among Malaysia’s 100 Leading Graduate Employers, took part in the fair.

Ten of them conducted the “M100 Challenge” for applicants to demonstrate soft skills.

“It’s the trend today where an applicant needs to be ready in a given situation where talent scouting is on soft skills rather than paper qualifications,” said fair co-organiser GTI Media Sdn Bhd director Isaac Hee.

“This type of talent recruiting is making its presence here as such recruitment has been going on for some time in Kuala Lumpur,” he said.

HP Malaysia Manufacturing Sdn Bhd organised a game where the participants need to build an exact prototype of a model structure without touching it.

“The leader needs to observe and visualise it and relate it to the team articulately, and devise a strategy to build the model,” said the company’s Pen Assembly department manager Gary Gan.

“We are looking at how the participants perform and some would be given the opportunity to work with us if they meet the mark.”

Dr Chong said the event would also enhance the marketability of KDU students as they would be undergoing a higher level of talent scouting process.

More than 400 graduating students, including job seekers from other colleges, took part in the fair.