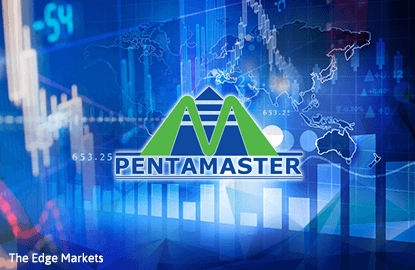 GEORGE TOWN: Pentamaster Corp Bhd (PCB) hopes to declare dividends in two years’ time on the back of a robust growth in its business following the recent listing of its 63.1%-owned automated solutions arm, Pentamaster International Ltd (PIL), on the Hong Kong Stock Exchange (HKEX).

“At the moment, we need to use the cash reserves to build the company,” group chairman Chuah Choon Bin told The Edge Financial Daily. “We are at a growing stage now, at a teenager level, but once we are strong we will give dividends to shareholders. Give us one or two years, it is not a long way.”

Chuah stressed the need to grow the value of the group’s stock based on expansion plans, its RM280 million cash reserves and near zero gearing — a far cry from the 2008 to 2011 period when it owed banks up to RM80 million.

PCB’s share price hit a record high of RM3.09 on Dec 27 last year after announcing that the listing of PIL will take place on Jan 19. The stock has since pared some of the gains, closing at RM2.15 last Friday, with a market capitalisation of RM680.66 million. In a year, the stock has risen 108.68%.

“I think what is important is that we increase the value of the stock by expanding the business, do more research and development (R&D) to develop solutions for the market rather than pay dividend now,” said Chuah.

PIL’s listing on Jan 19 raised RM192 million, of which RM92 million would go towards PIL’s business activities, leaving RM100 million to be used for PCB’s expansion, which includes the establishment of a R&D plant in China that will hire optic and electronic engineers, and a technical sales office in the US. There are also plans to set up a manufacturing plant.

Chuah said gaining China’s attention was one of the key aims of PIL’s listing on HKEX. “Since our listing, we have gained a lot of visibility in Hong Kong and China, not to mention it is also easier to raise funds there,” he said.

“Currently, 50% of our exports go to mainland China, including to US-based multinational corporations located there. We expect the exports to rise to 60% in the near future. The business opportunity is great which is why we are expanding our facilities,” he added.

Penang-based PCB is using the money raised to also build a new plant with a 100,000 sq ft floor space in Batu Kawan, and expand its current facility in Bayan Lepas by 20% to 120,000 sq ft, while acquiring a medical company in Malaysia.

The expansions would cater to its intelligent automated robotic manufacturing (IARM) business for single use medical devices that would start soon, with some 5% contribution expected to the financial year ending Dec 31, 2019 (FY19).

The ATE solution for smart devices in the telecommunication sector contributes over 60% to its revenue while the automotive segment’s contribution will rise to more than 15% to FY18 from 6% last year.

The group has an order book of more than RM250 million as at Dec 31, 2017, said Chuah, adding that orders for the first quarter of 2018 have stacked up, boosting his confidence of another double-digit growth in revenue in FY18.

“We are actually operating overcapacity now. There is business to be harvested but we are facing lack of space and engineers. However, the new plant is expected to be operational by the middle of this year.

“We hope to hire optic and electronic engineers in Taiwan or China. When our R&D centre is up and running, we would be able to develop better solutions for the market,” he added.

In the past three years, the compound annual growth rate for the group’s revenue and profit after tax was 23.3% and 69.8% respectively.

Pentamaster’s recent double-digit growth and the listing of PIL caught the eye of Kumpulan Wang Persaraan (Diperbadankan) (KWAP) which has raised its stake in PCB to 11.62%, making it a major shareholder.

“I think KWAP is seeing the potential in the future of technology we are in — 3D sensing. It is going to be used a lot in autonomous cars and electric vehicles. We have developed a 3D sensor testing capability to test the component that can be used in telco, automotive and smartphones,” said Chuah.

He said five years ago, PCB only focused on automotive handlers without test solutions, which “anyone could do”, so he built the handler with tester as a complete ecosystem to reduce competition.

“We are also looking to secure more IARM business from the US. We have secured a few now. This segment has a lot of growth potential because of Industry 4.0 where factories look to becoming fully automised.

“Our technical sales unit in Sunnyvale, US, would be able to discuss with clients regarding requests for quotations and proposals. Proximity to our clients is key, hence we see our US business growing. More so now with the US placing 30% tariff on raw materials which would make manufacturing in US expensive,” he added.