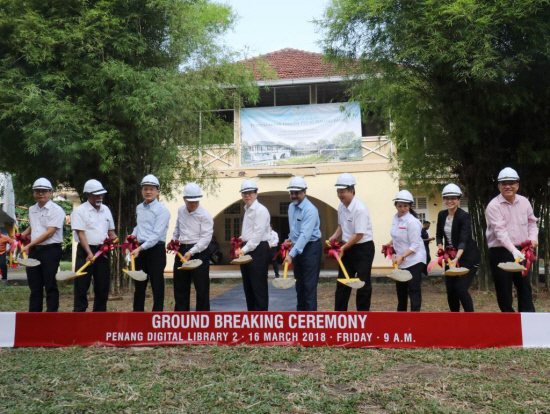 GEORGE TOWN: Penang plans to build a second digital library in the state following the resounding response to the first one which was established around 18 months ago.

Chief Minister Lim Guan Eng said the second library should be ready by year-end after an impressive number of young people had patronised the first one.

“We achieved a breakthrough in building an extension to our very own Penang Digital Library (PDL) shortly after 18 months since the official launch of PDL,” Lim said after witnessing the ground-breaking ceremony for the Digital Library Phase-2 (PDL-P2).

The second library will be built adjacent to the first one along Jalan Masjid Negri – near the country’s oldest schooling institution – the Penang Free School.

Lim said the current capacity of PDL is just not enough to accommodate Penangites who constantly visit the library from morning till late at night for study and work, adding that the capacity for the new PDL-P2 will be at least four times that of the original, at approximately 16,000 sq ft.

He said the state government opened the call for tender for the main building works of PDL-P2 in December last year and Jayamas Property Construction Sdn Bhd was selected as the main contractor for the project.

“The design of PDL-P2 is based on the concept of ‘Library in the Park’ where it takes inspiration from the tranquil atmosphere of the designated site with large trees.

The objective is to provide a conducive space for digital learning and encourage interaction within the community,” he said.

He stated that PDL-P2 includes four spatial components: a 4,000 sq ft reading space in the ‘Mansion Library’; a 10,000 sq ft of learning, teaching and discussion space in the ‘New Annex’; a 2000 sq ft of dining area in the ‘Library Café’; and an open air recreational area called ‘Wisdom Street’.

The Penang Digital Library – an initiative by the Penang State Government in collaboration with Keysight Technologies and Eastern & Oriental Berhad (E&O) and supported by TIME – aims to reengineer how information is curated and consumed in today’s digitally-driven world and to bring back the “human” aspect of social collaboration.