Penang Celebrates the 50th Anniversary of its Industrialization Journey in 2022 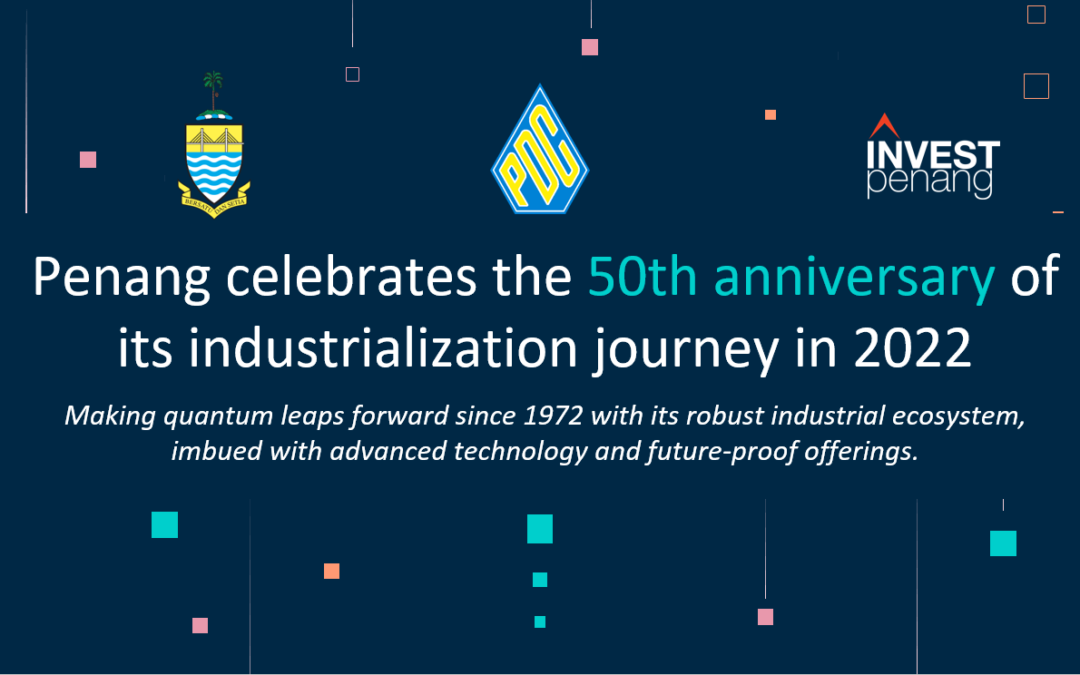 Penang, November 20, 2021 – The Right Honourable Mr. Chow Kon Yeow, Chief Minister of Penang announced that Penang will be stepping into the 50th anniversary of its industrialization journey in 2022 and the State has curated a year-long series of events for this celebration.

Penang’s transformation, from a traditional seaport economy into the Silicon Valley of the East, began in 1972 when the establishment of Malaysia’s first free trade zone in the State drew key investments from eight Multinational Corporations (MNCs). Also known as the “8 Samurai”[1], their arrivals have heralded the development of a robust ecosystem of ancillary industries, cemented Penang’s conducive location for MNCs’ pioneer offshore manufacturing sites and elevated the State’s status as a prominent hub for advanced manufacturing and high value-added upstream activities. More importantly, for the past two decades, Penang has also nurtured numerous homegrown technopreneurs, founding and building companies that have grown to become internationally renowned in their own right.

True to its reputation as the Silicon Valley of the East, Penang is the most important manufacturing base for electrical and electronic (E&E) products within Malaysia, and is among the most vibrant hubs globally, with an estimated 5% of global semiconductor exports. In 2020, Penang’s exports surpassed the RM300 billion mark to reach a record high of RM310 billion (US$77 billion), out of which, 82% are contributed by E&E and professional, scientific and controlling instruments (including medical devices). Notably, Penang generated RM110 billion (US$27 billion) of trade surplus in 2020, representing 60% of Malaysia’s total. In 2013 – 2020, Penang’s exports were consistently on a rising trend and achieved a CAGR of 10%, signifying the State’s resilience to navigate through the industry cycles.

Chow said: “Going forward, we will continue to uphold Penang’s competitive edge and further entrench our position in the upstream activities, with the aspiration of becoming the leading hubs for IC design and front-end equipment manufacturing, while strengthening the existing industry clusters in E&E, back-end Machinery & Equipment and MedTech. With Penang’s sustainable ecosystem, I am confident that the State is poised to be on the right trajectory to realize these goals.”

“I would like to express my deepest appreciation to all industry players for the continued confidence in Penang, as well as the Federal and State agencies for the concerted efforts in solidifying Penang’s position as a preferred investment location throughout this 50-year industrialization journey. The State will stay committed to forging ahead with all stakeholders and I look forward to more exciting opportunities in years to come,” Chow added.

Chow, who is also the chairman of Penang Development Corporation (PDC) and InvestPenang, has appointed PDC as the lead agency and InvestPenang as the co-lead for this celebration.

About Penang Development Corporation
The Penang Development Corporation (PDC) was established in 1969 as the leading development agency for the Penang State Government. PDC has been tasked to spearhead the socio-economic growth, create employment opportunities and improve the quality of life in Penang. PDC’s main activities include the development of industrial parks, townships and affordable housing. Since its inception, PDC’s strategies in industrial and housing development have enabled Penang to position itself as a leading industrial, tourism and services hub in the region.

About InvestPenang
InvestPenang is the Penang State Government’s principal agency for promotion of investment. Its objectives are to develop and sustain Penang’s economy by enhancing and continuously supporting business activities in the State through foreign and local investments, including spawning viable new growth centres. To realize its objectives, InvestPenang also runs initiatives like the SMART Penang Centre (providing assistance to SMEs), Penang CAT Centre (for talent attraction and retention) and i4.0 seed fund (a catalyst for the startup ecosystem).