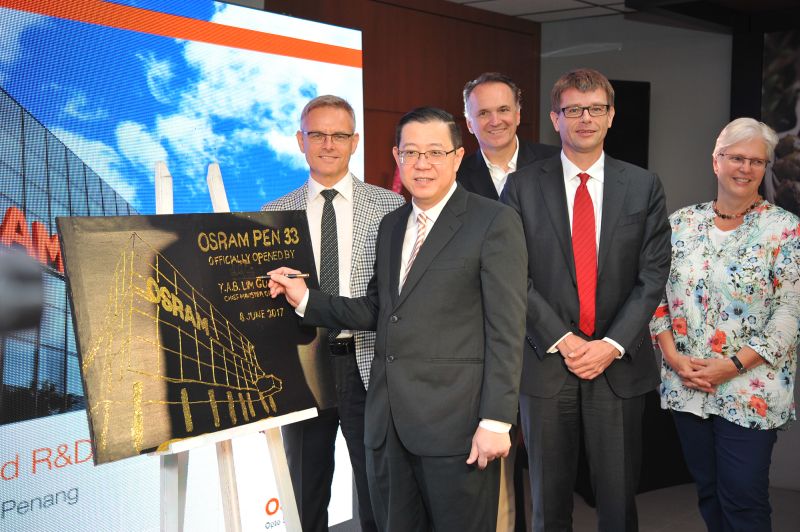 The new job openings, created for the SSL headquarters that was based in the old plant back in 2014, included 250 vacancies for engineers.

The World Semiconducftor Trade Statistics announced an increase of 18.1 per cent for semiconductors sales worldwide, reaching US$30.9 billion for March this year compared to US$26.2 billion in March 2016.

“The lighting industry is seeing growth at pretty much the same percentage,” Mueller told reporters at the launch of the new building in Bayan Lepas here this morning.

This is the second time in three years that Osram has expanded its operations at its 45-year-old site in Penang.

“Our Penang operations have been successful because we have been able to blend the strengths of German engineering with Malaysian manufacturing,” Mueller said.

During his opening speech, Penang Chief Minister Lim Guan Eng said the plant’s expansion adds to the steady flow of investments into Penang.

Penang Chief Minister Lim Guan Eng at the grand opening of the new Osram SSL headquarters and R&D Centre in Bayan Lepas.“In 2016, FDI from Germany worth RM404 million was recorded for Penang and was the third largest among the foreign investments received,” he said, referring to foreign direct investments.

He said Radiant Insight had forecasted that LED demand will grow by a Compound Annual Growth Rate of 29 per cent per year through 2020 to reach USD63.1 billion by 2020.

On Osram’s new building, Lim said it is a private-public-partnership initiative where Penang Development Corporation injected RM15.5 million in developing the 6,500 sq m building to lease to Osram.

“More jobs will be created via downstream opportunities created for local supply chain support and vendors,” he added.

Lim also said the state will continue to increase the number of public-private-people partnerships to attract new investments and to facilitate re-investments in the state.