In the years to come, Malaysian semiconductor and semiconductor-related companies, also known as electrical and electronics (E&E) or technology firms, will have to re-strategise carefully amid the intensified tech cold war, which is central to the bigger US-China trade war.

Like it or not, semiconductors are now at the core of the technology cold war, and Malaysian E&E players may have to strike a fine balance between the two superpowers — much like the function of, well, semiconductors.

The protectionism and renationalisation wave in the tech sector has created not just tremendous opportunities for the rest of the world, but also some complications and challenges.

Globalisation is likely to be a thing of the past, whereas regionalisation or localisation could be the future.

Players in the semiconductor industry, from upstream to downstream, will have to go through a painful reconfiguration of complicated business relationships with their suppliers, partners and customers from various countries.

ViTrox Corp Bhd founder and president Chu Jenn Weng acknowledges that in the short term, he sees more positives than negatives from the trade war. He says semiconductor demand from Asia, especially China and Taiwan, has increased significantly.

At the same time, American companies are moving out from China and increasing their capacity elsewhere. Such a mega trend has raised the demand for technology equipment, benefitting Malaysian companies such as ViTrox.

But in the long run, when the US and China are protective of their own interests at the expense of free trade, the global economy could suffer, he warns. “To me, any war is not good for the world. When the elephants are fighting, it is the grass that suffers most. The world will be divided. There will be some casualties. We only have one planet, so we should try to make it a better place.”

For instance, Chu says, if China moves up the value chain and produces its own chips, American chip players may also suffer because most of their orders come from China.

He concedes that another downside of the trade war is that Malaysian companies may have to choose between the US and China. “We need to find ways to retain our business. For example, during the trade war, we lost a sizeable order to supply our machines to an American EMS (electronics manufacturing service) company, which refused to work for a China smartphone company. But when this Chinese firm switched to a non-American EMS player, we somehow got back the order at the other end. We lost some, we won some.”

Chu adds that as Malaysia is a small country, it would be wise to remain neutral, if possible. “Today, we have over 400 customers, including all the major smartphone players from China and the US. As far as ViTrox is concerned, we don’t choose sides. We would love to continue to support all of them.”

As a result, Huawei last year spent RMB167.4 billion (RM102.4 billion) stockpiling up to two years’ worth of chips, components and materials to shield its operations from Washington’s crackdown.

At the country level, China, the world’s biggest chip importer, refuses to be held to ransom by the US. Chinese president Xi Jinping has often referred to China’s reliance on imported technology as qia bozi, or being strangled by the neck.

Last year, Beijing set up a RMB204.2 billion state-backed semiconductor fund to nurture its domestic chip industry and close the technology gap with the US.

Industry observers point out that the tech war has forced China to be more aggressive and independent. But as it is, the country is still way behind in chip manufacturing.

Meanwhile, it was revealed in May that TSMC will be building a US$12 billion (RM52.2 billion) chip manufacturing plant in Arizona, the US.

This deal appears to be a big win for the Trump administration, which has been urging American semiconductor firms to reduce their reliance on chips manufactured in Asia, and more importantly, bring jobs back to the country.

Greatech Technology Bhd executive director and CEO Tan Eng Kee is of the view that the trade war will add growth momentum to the Malaysian economy, as the US is now open to other options in relocation. In the past, it was narrowed down to only China.

“Malaysia could seize this opportunity because we have the right pool of talent, especially our engineering capabilities. And in terms of cost, our manpower cost is still one of the lowest compared with our neighbours,” he tells The Edge.

On the corporate front, Tan says Greatech is seizing opportunities in the US and Europe, as the adoption of automation is growing extensively there. “These advanced countries are more willing to adopt new technology advancement because the demand for such needs is higher and they are less stringent with cost. With our presence in these regions, it will benefit us because we are migrating the technology from the advanced countries to our home ground,” he comments.

FoundPac Group Bhd CEO Ong Choon Heng concurs that Malaysian E&E players are beneficiaries of the trade war, although it still depends on the company’s nature of business individually.

“The US is trying to block chip supplies to Huawei. China will now have to build up its own ecosystem for the semiconductor sector, especially in terms of the chip manufacturing industry. Today, China is capable of doing almost everything, except the chips. They still need to rely on the likes of Broadcom Inc or Qualcomm,” he tells The Edge. 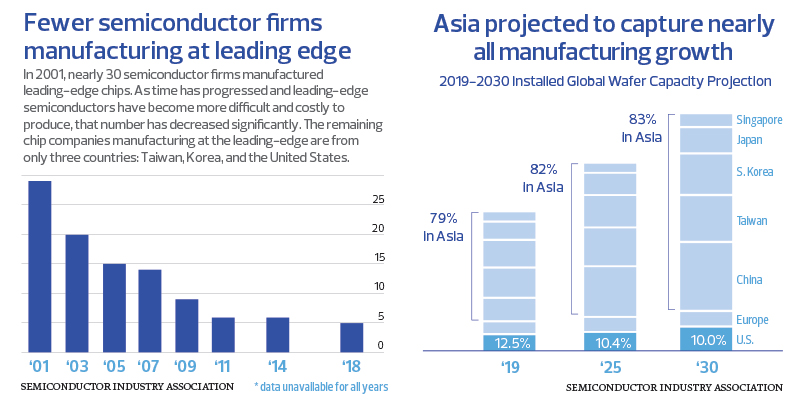 Ong goes on to say that when China is capable of making its own chips, FoundPac will be ready to support the Chinese firms.

“It’s not an election or foreign affairs, whereby I can only choose between the US or China. I can support both ecosystems. For us, there is no patent issue. Of course, for some companies, if they sign exclusive rights with the US companies, then they cannot supply to China,” he says.

Ong highlights that American corporations, being patriots, need to move out from China.

Malaysia seems to have many advantages over its neighbours — Vietnam’s cost of doing business is not cheap anymore, Thailand has a language-barrier problem and Indonesia has a sometimes hostile business environment.

“By attracting them (American corporations) to come to Malaysia, it will create job opportunities. But more importantly, they need local supplies and support, which means more business opportunities for us,” he says.

Oppstar Technology Sdn Bhd managing director Ng Meng Thai admits that the international technology market is being greatly influenced by the escalation of the US-China trade war, which has been steadily providing new business opportunities to companies, particularly those involved in semiconductor design and development.

“After all, this sector has been the heart of the technological war between the two superpowers. The effects of the trade war, as observed from Huawei’s situation, have also caused some current technology-dependent superpowers to change their strategy by moving for broader independence rather than interdependence,” he tells The Edge.

Ng envisions that this trend will create more opportunities for semiconductor companies that are taking a non-partisan stand, as Malaysia’s neutrality has allowed local companies to ride on the coattails of the tech war.

“We think the trade war will give us opportunities as long as Malaysia is deemed as a neutral country. Our people’s ability to serve English and Mandarin-speaking customers is a key advantage. Further to that, there are not many countries that are good in chip design as it is a highly specialised field with high investment as a key deterrent,” he explains.

Ng reiterates that the trade war presents opportunities for Malaysia to attract companies from both the US and China.

“For the US and even Europe, they do not want to be too dependent on China as a manufacturing base. Hence, they would be engaging Malaysian EMS companies and packaging houses. Besides, automation companies would be serving both sides, as long as IP (intellectual property) issues are not a concern,” he says.

At a time of deglobalisation, says Ng, both the US and China would try to retain key technologies. However, Malaysia will not be a threat to both superpowers. Therefore, he says, the country would do well in adopting a well-balanced strategy.

While Malaysia is an optional base for some semiconductor companies, Ng points out that the key challenge for it is its dependence on foreign companies. It has not moved towards building local champions.

“I think Malaysia has regressed in our competitiveness, even on the front end of the semiconductor industry. Several companies, including Oppstar, are trying to compete but given the challenge coming from Vietnam, India and China, Malaysia will be just another player,” he concludes.