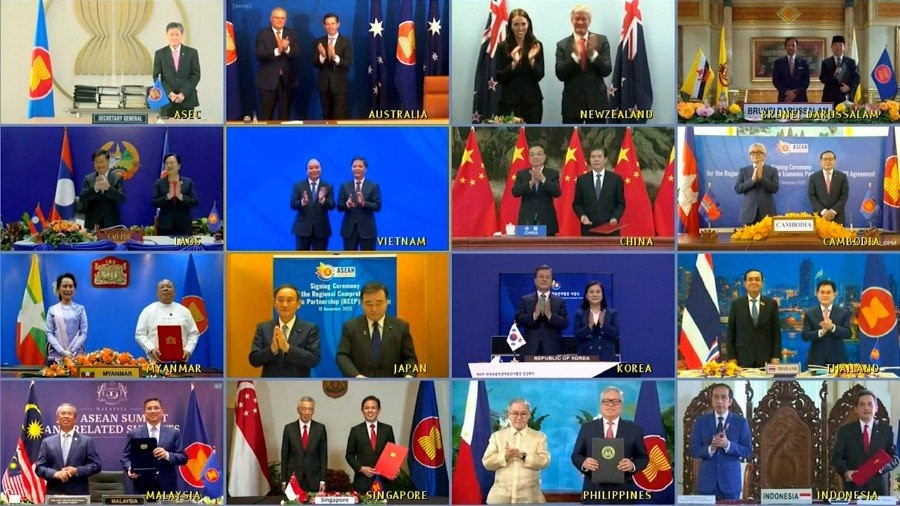 Azmin said Muhyiddin, who witnessed the momentous occasion, said the signing signified to the world that Asean, with its five Free Trade Agreement (FTA) partners, places utmost priority on regional economic integration that facilitates cross-border trade, investments and the easing of non-tariff measures.

“The signing is the culmination of eight years of arduous and protracted negotiations involving 31 rounds of negotiations, eight ministerial meetings and four summits.

“Undoubtedly, it represents a significant and imperative milestone in the integration and revitalisation of economies of the 15 parties.

He said the signing had been a long process, stressing that it is Asean-driven, which is its uniqueness, compared to other FTAs which were normally driven by powerful countries.

“The RCEP is driven by Asean members, comprising various economic backgrounds. Therefore with the participation of Asean dialogue partners such as Australia, New Zealand, China, Korea and Japan, for sure it will become a platform that can open a wider market for traders and businesses in the country.

“Our internal market is too small, it is impossible for us to increase productivity and generate sustainable growth for the country and the region. With the existence of the RCEP, that is also the biggest FTA in the world, I am confident it can give access to a bigger market for traders in the country to move forward.

“It will provide better access to bigger markets and certainly this would help our investors and business community to move forward. It is also to ensure there would be no disruption in terms of the supply chain and also our new ventures into new opportunities including e-commerce and digital economy,” he said.

Azmin reiterated the importance of having India re-join the RCEP as it can play a pivotal role to provide prosperity in the region by paving the way for a bigger market and bringing better access to Malaysia’s business leaders.

He added that the signing is also testament to the strengthening of the multilateral trading system, as well as upholds the development agenda in the World Trade Organisation.

Azmin said with different economic development levels of all parties, the RCEP will contribute to sustaining Malaysia as a preferred trading hub and investment destination.

He added that to Malaysian businesses, it will mean tariff elimination and reduction for merchandise goods, including the facilitation of export and import of goods among RCEP countries. Service providers, including e-commerce companies, will be able to enjoy greater market access in terms of cross border supply and establishing commercial presence in the RCEP markets.

“In addition, the RCEP will promote, facilitate and protect the investment climate of participating countries within the region. This also includes information exchange and promotion of transparency measures to facilitate businesses and investments within the RCEP area.

“Realising that Small Medium Enterprises (SMEs) play a pivotal role to the backbone of economies, the RCEP could provide a level playing field between developed and less developed countries. There is a specific chapter on SMEs providing provisions for information exchange and promotion of transparency measures to facilitate businesses and investments within the region including providing economic and technical cooperation to SMEs.

“It can be an economic recovery tool against Covid-19 which will help to ensure the opening of markets as well as uninterrupted supply chains,” said Azmin.

“It will enhance inter and intra-regional trade and investment, strengthen regional value chains as well as facilitate transparency, information sharing and harmonisation of technical regulations and standards,” he added.

On the Comprehensive and Progressive Trans-Pacific Partnership (CPTPP), Azmin said he was in no position to speak on its ratification, but Malaysia will monitor its development closely with the new United States administration under the leadership of president-elect Joe Biden.

“But certainly, we would expect the new administration in Washington DC to focus more on Asean and see how we can strengthen US-Asean trade as well as investment opportunities.

“Asean has a huge market with a population of over 650 million. So certainly Asean countries are ready to be more competitive and to enhance our collaboration with the new administration in Washington DC,” said Azmin.