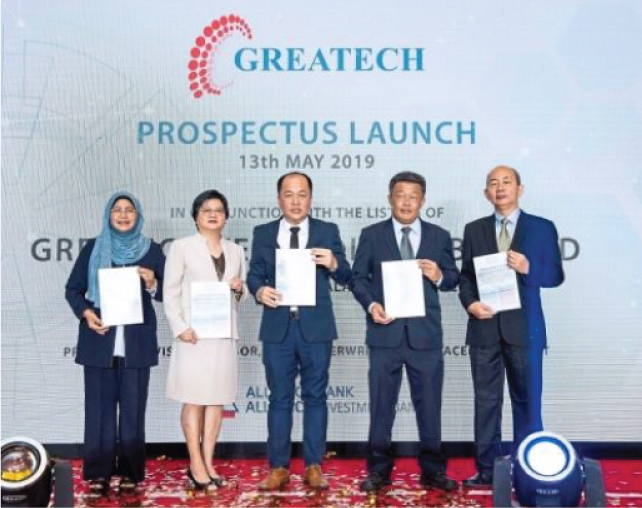 KUALA LUMPUR: Greatech Technology Bhd is aiming to raise RM73.05mil from its initial public offering (IPO), alongside plans to expand its operations to the United States and China.

The Penang-based industrial automation solutions provider is planning to take their expertise and technology to the Silicon Valley and Shanghai.

Executive director and chief executive officer Tan Eng Kee said the company is also looking to explore areas such as the east coast of the US as well as Arizona.

“Whatever new technology there is comes from there and I believe we need to put our foot in the US.

“If you talk about the trade war, looking at the unemployment rate in the US, it is still much better than other regions.

“We are going to open an office and have some engineering applications for the US market.

“A small portion (of the proceeds) will be for China where we’ll incorporate a company in Shanghai,” he told a press conference after the launch of Greatech’s prospectus here yesterday.

The expansion plans are expected to commence in the second half of the year.

Out of the RM73.05mil that it plans to raise, RM18mil will be for business expansion, development and marketing.

A huge chunk of this will be parked in the United States.

Meanwhile, the other proceeds will be RM5mil for capital expenditure, RM36.55mil for working capital, RM8.5mil for the repayment of bank borrowings and IPO expenses.

Greatech is slated for listing on Bursa Malaysia’s ACE Market on June 13 with a market capitalisation of RM381.86mil.

The IPO will see an offering of 119.75 million new ordinary shares, out of which 18.78 million are open to the public, with the IPO price of 61 sen each.

“We discovered a niche in the process automation segment and focussed on it and this has proven to be fruitful for our group.

“We are well positioned to benefit from increasing adoption of automation worldwide to achieve higher productivity and greater efficiency.

“Diversification into new sectors such as the battery segment for energy-efficient vehicles (EEV) is also of essence for us to remain competitive in the global marketplace,” Tan said.

The significant increase in 2017 and 2018 was mainly due to its production line systems, which contributed 71% and 84% respectively.

Tan said the company is targeting a 10% to 15% growth in revenue this year.

The company’s order book as at April 15 was RM91mil.

Some 90% of the company’s products are exported, mostly to American companies.

Some are exported directly to the US itself in places such as Buffalo and Ohio.

This increased to 63% last year.

Asked if it would consider opening facilities in Vietnam, Tan said the company’s focus on its manufacturing hub will still be in Penang.

This is due to its advantages compared to other countries in terms of talents and costs.

It currently has around 120 automation engineers in Penang.

The second half this year will see Greatech’s new Bayan Lepas facility becoming operational while construction of its Batu Kawan facilities will commence.