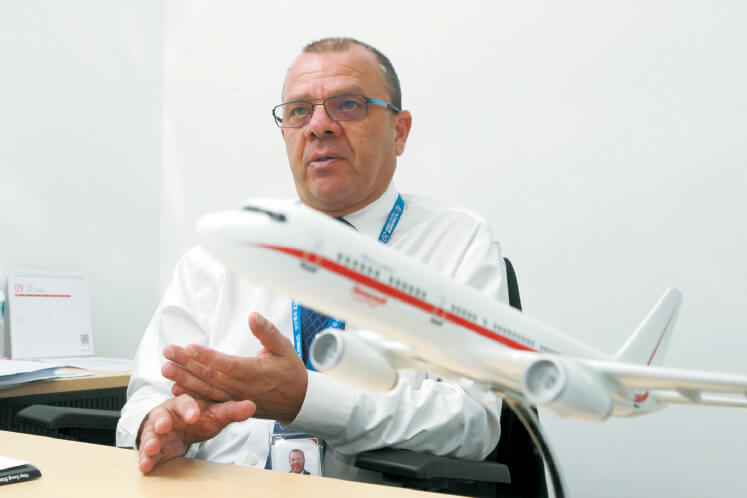 SINGAPORE: Honeywell International Inc says its plan to establish a new aircraft maintenance, repair and overhaul (MRO) facility at the group’s aircraft parts manufacturing plant in Penang is still in the preparation stage.

Honeywell is keen to implement the project, mooted in 2016, as the group is bullish about MRO’s future prospects, said Brian Davis, the group’s air transport and regional commercial aerospace vice-president for Asia-Pacific.

“The discussion about the MRO expansion is ongoing,” Davis told The Edge Financial Daily on the sidelines of the Singapore Airshow 2018 last week.

“We will keep you posted on that because it is the very key to our growth in Southeast Asia. It is progressing really well,” he said, but did not elaborate.

Earlier at a press briefing, Davis said the MRO market in the Asia-Pacific region is forecast to grow 4.3% per annum to US$22.6 billion (RM89.49 billion) over the next decade.

“This year alone, Southeast Asia’s commercial fleet is expected to generate US$5.8 billion in MRO demand,” he said.

By 2025, Davis said Asia-Pacific is expected to see the largest commercial air transport fleet growth globally at a 5.2% compound annual growth rate, higher than the global average of 3.4%.

“Specifically, China’s MRO demand is forecast to witness the largest net growth in the world, growing at 10.1% annually,” he said.

Currently, Davis said Honeywell’s MRO facilities in the region are located in Singapore, the Philippines and China, catering to auxiliary power units, wheels and brakes, and avionics.

Davis said the MRO expansion in Penang is crucial to cater for the increasing aircraft fleet within the Southeast Asian region.

“Countries in Asia-Pacific, including China and Indonesia, make up the top five fastest-growing markets in terms of annual additional passengers in 2036 compared with 2016. Thailand will also become one of the top 10 largest aviation markets by 2036. Asia-Pacific will be the biggest driver of passenger demand for air travel from 2016 to 2036 with more than half of the global new passenger traffic coming from the region,” he said.

“From 2017 to 2036, the Asia region will witness a demand for 16,050 new airplanes, valued at US$2.5 trillion, on the back of growing Asian gross domestic product (GDP) and passenger traffic. China will displace the US as the world’s largest aviation market around 2022,” he added.

Davis said more than a quarter of Asian demand will come from Southeast Asia.

“There is a projected demand for 4,210 new airplanes, valued at US$650 million over the next 20 years in Southeast Asia. Asean countries can add almost 25 million jobs and US$298 billion to the region’s GDP by 2035 if they invest in aviation infrastructure,” he said.

“The Asean region holds untapped opportunities for continued growth in the commercial aviation market industry, especially in tier-two cities,” said Davis. “Less airspace restrictions through OpenSkies and bilateral agreements such as the Asean Economic Community, coupled with the expansion of low-cost carriers, have played a key role in driving inter- and intra-region air connectivity.”

Honeywell International Inc. is an American multinational conglomerate company that produces a variety of commercial and consumer products, engineering services and aerospace systems for a wide variety of customers, from private consumers to major corporations and governments. (Source: Wikipedia)