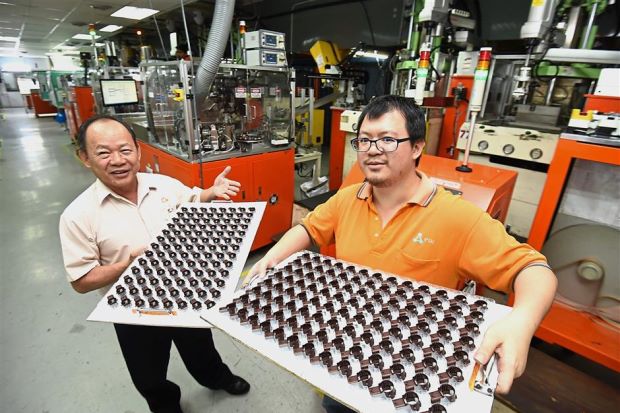 “These casings are made from imported plastic and steel material that can cut off interference of signals from other electronic devices.

Currently, the main markets for its EMIS casings are the US, Europe and China.

Sale of its products will continue to be supported by the growing demand for vehicles in the coming years.

A Euler Hermes report projects that the automotive market is on course to cross the 100 million unit threshold in 2019.

“Positive forecasts in private consumption and corporate investment, fuelled by rising incomes and still low interest rates, will support new registrations in passenger cars (74% of the total) and commercial vehicles (26%) in the majority of countries,” the Euler Hermes report adds.

According to Tan, the company is now also producing high-value plastic parts and pumps for portable nebulisers.

“North America is an important market for nebuliser technology, probably one of the largest, due to the growth of chronic obstructive pulmonary (COPD) and respiratory diseases. Asia Pacific is another growth area because of the rise in healthcare infrastructure investments.

“Our key customers for nebulisers are in the US,” he adds.

The company is investing RM30mil to build a new manufacturing plant in Seberang Prai.

Tan notes that its current manufacturing plant in Seberang Prai is over 80% utilised.

“This is why we are building another facility next to the present one. The investment is about RM30mil for land and equipment. The facility should be ready in six to nine months.

“There will be 10 automated production lines and an automated inspection system in the new facility,” he says.

Its automated lines will help reduce its reliance on manual labour, which, Tan says, is becoming expensive.

“The cost of recruiting foreign labour, for example, has increased. It is expected to increase our present production capacity by 50%,” he says.

The new production site should start contributing to the group’s revenue in 2019.

According to Tan, Prestige Dynamics’ gross margin has been slashed due to intense competition from China, Indonesia and Thailand.

“To enhance competitive edge, we have to automate and reduce the foreign labour component, which eats into our margins.

“We currently have 400 employees. The new plant will engage only 40 workers, comprising largely of engineers and technicians,” he says.

Tan adds that the cost of imported raw materials – such as nylon, polycarbonate plastics, and engineering plastics – increased by about 11% in 2017.

He expects the raw material cost to increase further in 2018.