From a journalist to CM 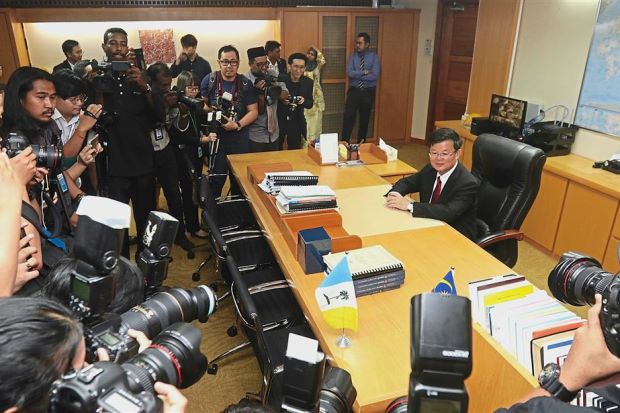 Small-sized, bespectacled and quite unassuming, this sub-editor always wore a careful smile in The National Echo newsroom in Penang more than 30 years ago. In fact, some of us had even nicknamed him “Mr Nice Guy”.

Chow Kon Yeow, the new Chief Minister of Penang, was such a perfect gentleman that none of us would have thought that he would survive the roughness of national politics, let alone helm a state which is among the frontline in the nation.

Frankly, if Chow who is 60 now had told us then that his ambition was to become a chief minister, we would have taken it as a joke. Not because he was incapable, but his gentle ways and demeanour were not exactly seen as the right attributes to be a successful politician.

However, he has proven that humility and being a nice human can make you a successful politician. Unlike some politicians, he delivers his speeches at rallies with facts and figures, never indulging in mudslinging or calling his rivals names. He is known to be a better listener than a talker.

Our first impression of him in the office was that of a strict disciplina­rian and someone who only thought of work with no time for any small talk. While a group of us were constantly laughing at the back of everyone in the newsroom, Chow would just smile and turn away, showing the side of him which endeared him to his colleagues.

He also never joined in when we indulged in some juicy office gossip. I don’t know if he had a girlfriend then but chats about the female colleagues in the office were not for him either.

Chow’s even temper always amazed everyone in the office. Obviously like in every other newsroom, heated arguments took place often. Chow would argue gently with a constant smile on his face, not raising his voice even when his cheeks were turning red.

His foray into politics in 1986 was by chance, not design. The DAP led by Lim Kit Siang had then launched its first political assault on Penang calling it “The Battle of Tanjung”, a move to capture Penang in the general election that year.

Faced with lack of funds and a massive onslaught from the mainstream media, Chow and three others volunteered to produce a daily four-page newsletter called Suara DAP for the 10-day campaign period. With his multilingual strength, Chow was a remarkable asset.

The party made huge gains with Lim winning both his Parliament and state seats. So when he was looking for a political secretary with multilingual ability, Chow was his automatic choice. He is proficient in English, Bahasa Malaysia and Mandarin. And speaks a few other Chinese dialects too.

And when Lim was arrested the following year under the infamous Internal Security Act sweep called Ops Lalang, Chow showed his loyalty throughout by serving the constituents while his mentor Lim was held in the Kamunting detention centre for about 18 months.

Despite his non-confrontational and quiet nature, Chow survived the murky world of politics. He went on to be selected as the DAP’s candidate for the parliamentary seat of Tanjung and state constituency of Padang Kota first in 1999. Since then, he had always been an elected representative in both or either of the constituencies.

Former editor of the DAP organ The Rocket, K. Gurunathan, could not believe it when told that his former colleague Chow is now the CM of Penang.

“He was such a shy person who, in those early years, showed no evidence of being able to handle the rough and tumble or the dark arts of politics.

“But he grew in stature after being elected as an assemblyman,” said Gurunathan, who is now the mayor of Kapiti Coast in New Zealand.

“Having Lim as a direct mentor obviously helped with the transition. Like his mentor, Chow never let the dark arts undermine his high principles or decent values.”

It is obvious that Chow’s loyalty and a great sense of humanity and humility have paid off.

The word arrogance is not in his dictionary and he always has time for the ordinary folk, having come from a humble background.

Chow, who obtained a Bachelor in Social Sciences from Universiti Sains Malaysia in Penang, is married with two boys who are both studying in university.

He had to abandon his law studies after a year when he had to answer the call of DAP.

I am confident that with this exemplary politician at the helm, Penangites can rest assured that the Pearl of the Orient will scale to greater heights.

K. Parkaran is a journalist and researcher. He was a senior reporter at the now defunct National Echo, a deputy editor at The Star and then a producer at Aljazeera TV.