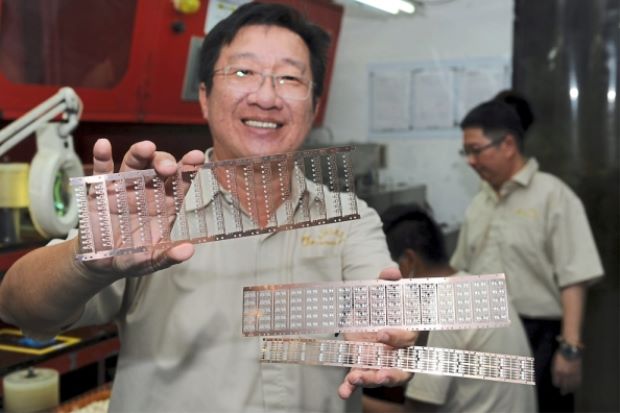 LEAD-frame manufacturer Amlex Holdings Bhd is looking at realigning its revenue sources by expanding its business in the automotive lighting segment.

Its upcoming move to a new facility would help it meet growing demand for its products this year, says managing director Lim Say Soon.

“The goal is to even out the contribution from the two divisions in two to three years,” says Lim.

“We will be expanding the automotive lighting business once we are settled in the new plant, which we have invested about RM6mil in,” he adds.

Amlex is moving to a new facility in Batu Kawan, Penang in June. The new site will have a manufacturing floor space of 20,000sq ft.

The company’s headcount will also increase by 20% to 180 staff, comprising engineers, tool designers, and automation programmers.

Amlex produces semiconductor packaging material such as lead-frames for LED modules and sensors used in smartphones and Internet-of-Things (IoT) products.

Lim notes that the market in China is driving growth for innovative lighting solutions for automobiles and he hopes to tap into this growing market by leveraging its customers.

“Amlex sells lead-frames to multinational corporations in Malaysia which then sells them to automotive customers in China.”

It is a huge market in China, he says. The market value of LED lighting to be used for passenger cars in China is projected to hit US$1.9bil in 2022.

According to Lim, the group will soon invest RM3.2mil on machinery to expand its production capacity.

“Without an expanded capacity, we won’t be able to tap into the automotive market in China nor increase our market penetration in the country, which is about 3% in the electronic packaging and interconnect solutions industry,” he says.

Amlex is also working on the miniaturisation of lead-frames used in smartphones and IoT products.

“We are now designing the 0.004-inch lead-frames for the new generation of smartphones and IoT devices using more sensors, which also requires more lead frames.

“We have a RM4mil budget for our design and development activities,” he adds.

The company is also investing in insert moulding, which is a cost-saving production technology process. Insert moulding differs from injection moulding, says Lim, in that it is used to enhance the physical qualities of the housing.

“The process is used mainly to manufacture housing for sensors requiring stronger protection,” he explains.

According to Lim, the smartphone market will also be one of the key drivers for the company’s growth in 2019.

“Although the worldwide smartphone shipments are expected to decline by 3% in 2018 before returning to low single-digit growth in 2019 and through 2022, we are confident that our smartphone segment will grow because of the new models planned for release in the third quarter.

“In 2018, all the big players have further built out their portfolios with bigger screens and higher-end smartphones, including Apple’s new launch in September.

“In the third quarter of 2018, the 6-inch to less than 7-inch screen size band became the most prominent band for the first time with more than four times year-over-year growth,” Lim says.

“By 2022, shipments of these larger-screen smartphones will move up to 1.38 billion units or 87.7% of overall shipment volume,” the report says.