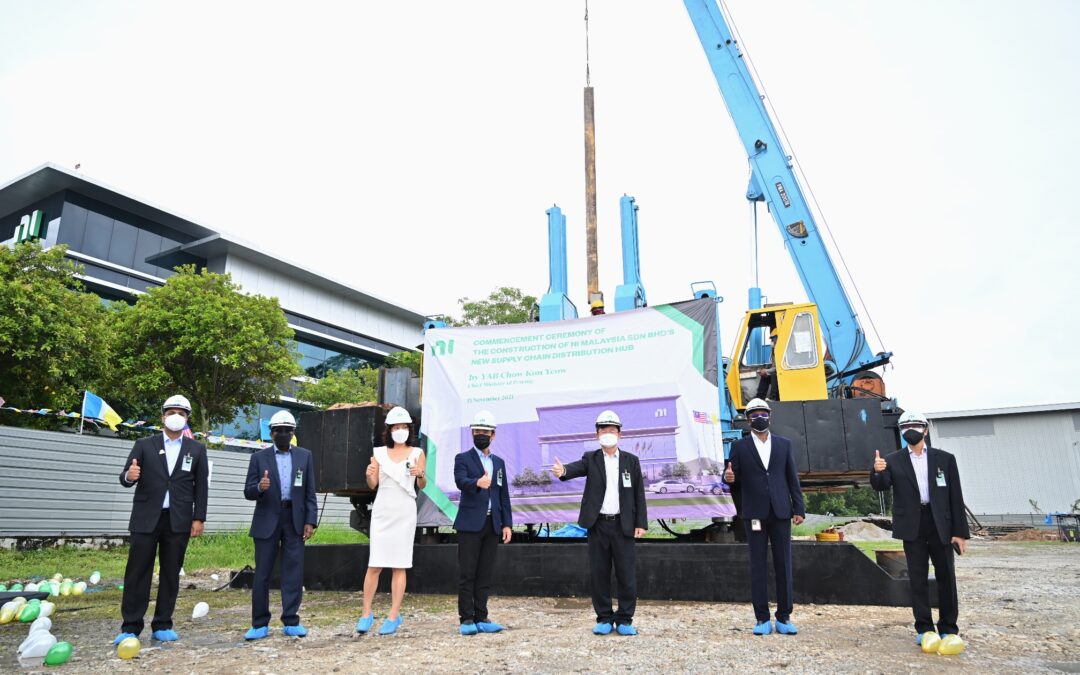 Nov 13 – Chief Minister Chow Kon Yeow officially launched the commencement ceremony of the construction of NI Malaysia Sdn Bhd’s new supply chain distribution hub next to its existing factory in Bayan Lepas today, after it was delayed twice due to the Covid-19 pandemic.

Formerly known as National Instruments, NI had announced back in November 2019 a broad-based expansion of their business in Penang that would include US$40 million (RM166 million) in capital investment.

To enable this growth, NI said they would build a new state of the art wing at the site. It would be a mixed-use building housing the shared service centre and the new supply chain distribution hub.

NI, which started operations in Penang since 2009, is the Group’s third largest operation site. It is one of the largest R&D outside its headquarters in Austin, Texas, with functions such as manufacturing, R&D, IT, finance, customer operations and more.

“Having been here in November 2019 to witness the announcement of NI’s expansion plans in Penang, I’m glad to be here again to be part of the next step in making the expansion a reality and I wish to congratulate everyone at NI.

“This project serves as NI’s new supply chain distribution hub for products that cater for Industry 4.0, 5G and the autonomous vehicle markets.

“This distribution hub is expected to be completed by April 2022 and create 250 high value jobs in Penang,” Chow said in his speech at the ceremony.

On Penang’s investment achievements, Chow said he was pleased that the state has garnered RM14 billion of approved manufacturing investments in 2020, the second highest in history and 75% of the amount was contributed by FDI.

This, he said, is an attestation of the investors’ confidence in Penang as a sustainable investment location.

“Aside from continuously investing in top-notch technologies and products here, NI also donated RM1 million for the Penang Future Foundation Scholarship Programme and RM150,000 to Penang Science Cluster in 2020.

“And today, NI has just announced it is donating another RM830,000 to Penang Science Cluster for the next four years to fund its Girls in Engineering and Tech (GET) Programme upon successful completion of its pilot project this year.

“NI’s dedication to creating a positive impact towards the talent pool in Penang is indeed a role model to the industry,” Chow added.

He said the rise of 5G, A.I., and IoT, especially with the outbreak of pandemic which accelerated the rate of adoption, would bring massive changes in the people’s lives as well as the outlook of the technology industry.

According to Chow, the state, through InvestPenang, would continue to work closely with the Federal Government, especially Ministry of International Trade and Industry (Miti) and Malaysian Investment Development Authority (Mida), to attract strategic investments.

NI managing director Selvam Chinappan, who is also the senior director of APAC Manufacturing, and his team were on hand to warmly welcome Chow and other distinguished guests when they arrived for the ceremony.

“With this new building, we will further strengthen our global manufacturing footprint as we will be distributing our products to our global customers.

“One key factor for our investment in Malaysia is the ease of doing business. This event is a testament to that.

“Due to Covid, the overall construction plan got delayed.

“We want to thank the mayor and InvestPenang for the help rendered to us. Even though we are not inside FTZ, the willingness of the city to fast track our application process and the excellent support and willingness to work with us help get us where we are today,” Selvam said.

Separately, he said NI Malaysia was pleased to announce it would be donating an additional RM830,000 to Penang Science Cluster for the next four years to fund the GET Programme.

He said the initiative was well aligned with its purpose of making a difference in the community where they live and work.

Yoon thanked Selvam for NI’s solid support for the programme.

“NI has been a tremendous contributor to PSC for developing science among our young children. By announcing four years of donating thousands of money, especially for the girls, to get them into engineering, we are indeed thankful.

Sivasuriyamoorthy, who was representing Mida CEO Arham Abdul Rahman, congratulated NI for its commitment to grow in Malaysia.

“Being a notable Fortune 500 company, the company’s decision to continue leveraging Malaysia as a base for its operation speaks volumes of Malaysia’s competitive manufacturing sector, which remains the mainstay of our economy.

“Over the years, NI’s presence in Penang has created substantial spillovers for our local industries, particularly within the electrical and electronics industry,”  Sivasuriyamoorthy said.