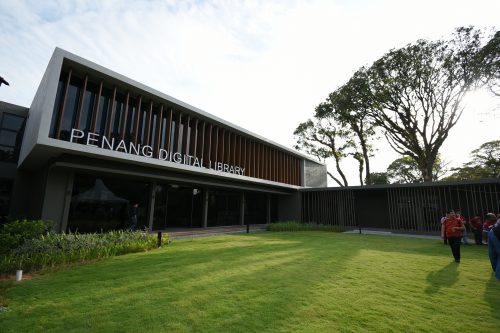 LIKE walking into its artist impression, phase two of the Penang Digital Library stays true to its concept of being a ‘Library in the Park’.

Picturesque, spacious and hi-tech, the building called PDL Phase Two takes inspiration from the serene and tranquil atmosphere of its designated site along Jalan Masjid Negeri in George Town.

With the main objective beingto provide a calm and conducive space for digital learning and to encourage interaction within the community, the space includes four spatial components amounting to a total area of about 16,000sq ft.

The space comprises of a 4,000sq ft reading space in the ‘Mansion Library’, 10,000sq ft of learning, teaching and discussion space in the ‘New Annexe’ and 2,000sq ft of dining area in the ‘Cabin in the Park’ Cafe and an open air recreational study area dubbed ‘Wisdom Street’.

Finance Minister Lim Guan Eng who graced the opening of the building said having both the Penang Digital Library and PDL Phase Two was an achievement.

“In May 2017, we launched the library’s 24-hour operations to allow round-the-clock access for free learning space.

“With the great demand, we realised we needed a second digital library.

“So, in August 2017, work began on the PDL Phase Two, which faces the first building,” he said at the opening ceremony of PDL Phase Two recently.

Chief Minister Chow Kon Yeow said the opening of the PDL Phase Two was in line with the state’s Penang 2030 Vision plan.

“The Penang government hopes to transform Penang into a model city, focusing on family, green and becoming a smart state.

“I am happy to note that all these three aspirations are infused into the design and development of PDL Phase Two.

“The Penang government initiated the first Penang Digital Library in 2016, with the opening of the Phase One building.

“The number of visitors to the Phase One building has exceeded its capacity.

“Our purpose of having the digital library is to transform the method of learning and to enable us to quickly access the information we need,” he said.

“The state is planning to collaborate with the National Library of Malaysia to increase its digital collection.

“The collaboration will reduce the cost for the state to provide eBooks and eMagazines.

“This is a form of smart networking between the state and the federal government,” he said.

Chow said the construction of the Butterworth Digital Library is scheduled to complete at the end of this year, while the Penang Islamic Digital Library in Scotland Road is expected to be built by the middle of next year.

PDL Phase Two is open to the public from 8am to 10pm daily.