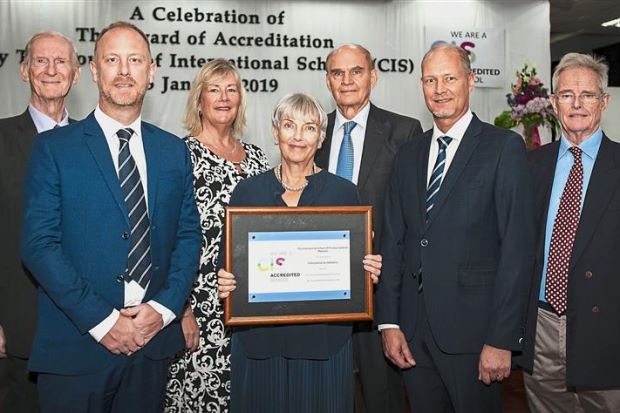 It joins an elite group of only around 500 schools worldwide to hold such status, which is testament to the world-class education students receive at its campus in Batu Ferringhi.

Uplands principal Giles Mongare saw the achievement as an opportunity for the school to further focus on the quality of teaching and student learning, education philosophy, as well as ensuring students’ well-being.

“We are delighted to have received full accreditation by the CIS, which reaffirms the school’s commitment to providing students with the skills, knowledge and opportunities to thrive as 21st century, global citizens.

“Everyone involved – from students and teachers, to support staff, parents and board members – can be immensely proud of this defining moment.

“Parents can now continue to enrol their children with us with absolute confidence, knowing that we meet international standards and remain the absolute best in Penang,” Mongare said during a ceremony at the school’s multi-purpose hall recently.

Handing over the accreditation plaque was CIS representative Bill Parker, who described the evaluation process as a robust one which begins with schools first applying to become CIS members.

“On average, only three out of every 10 applicants get admitted. Of those, only 60% will be recognised with accreditation. The evaluation is conducted by a panel of 10 to 15 experts from other international schools around the world.

“Accreditation means a school meets an exacting set of standards, and is committed to continued improvement and getting even better over time,” he added in his speech.

“The CIS is a membership community working collaboratively to shape international education through professional services to schools. Besides the focus on the quality of teaching and learning, accreditation also shows that a school is devoted to its mission and vision.

“It underscores a careful consideration of the services it offers to students, their family members and the community, promising only what it can deliver, is open to regular evaluation by its own school community and peer evaluators, and constantly seeks improvement in all areas.”

Following their visits to Uplands in Dec 2018, the CIS wrote that, “In visits to classrooms, well prepared and resourced teachers, highly engaged and energetic students; as well as teaching and learning that exemplified the school value of respect for everyone were observed.”

The quality and rigour of CIS International Accreditation is recognised by ministries and departments of education around the world, including NCCT in China, ONESQA in Thailand, State Departments of Education in Australia, the NAIS of America, the Council of British International Schools in the UK, and many others.

It is a mark of assurance that means students who graduate from CIS accredited schools have their transcripts fully recognised by the top universities and colleges around the world.

For Mongare, the accreditation is the latest highlight in Uplands’ long and illustrious history. It was founded in 1955 during the Malayan Emergency, as a primary boarding school on Penang Hill for 60 students.

It moved to Kelawai Road in 1977, and stayed there until 2006 when it moved to its present, purpose-built campus in Batu Ferringhi. Today, Uplands is home to around 730 students of 45 different nationalities.

Being in such a cosmopolitan environment has its advantages, as Mongare shared, “It’s increasingly important for children to be international minded. Being familiar with other cultures from a young age means they can go anywhere in the world later in life, and fit in with the society there.”

Besides being Penang’s first and only CIS-accredited school, Uplands is also the state’s only International Baccalaureate Organisation (IBO) Authorised World School.

Describing itself as “an international school with a proud British history”, it offers the IBO Primary Years Programme (PYP), the Camb­ridge International General Certifi­cate of Secondary Education (IGCSE) and IB Diploma Programme (IBDP).

Uplands Parent-Teacher Associa­tion (UPTA) chairperson Kristine Mitchell summed it up best, saying, “The education here positions your child to pursue their dreams in life, whatever they may be.

“I’ve seen mine grow not only academically, but also athletically and socially. I’m confident they’re being prepared for success, post Uplands.”