Minister: Mass Covid-19 Vaccination Centres to be Set Up for Factory Workers in Penang in Two Weeks 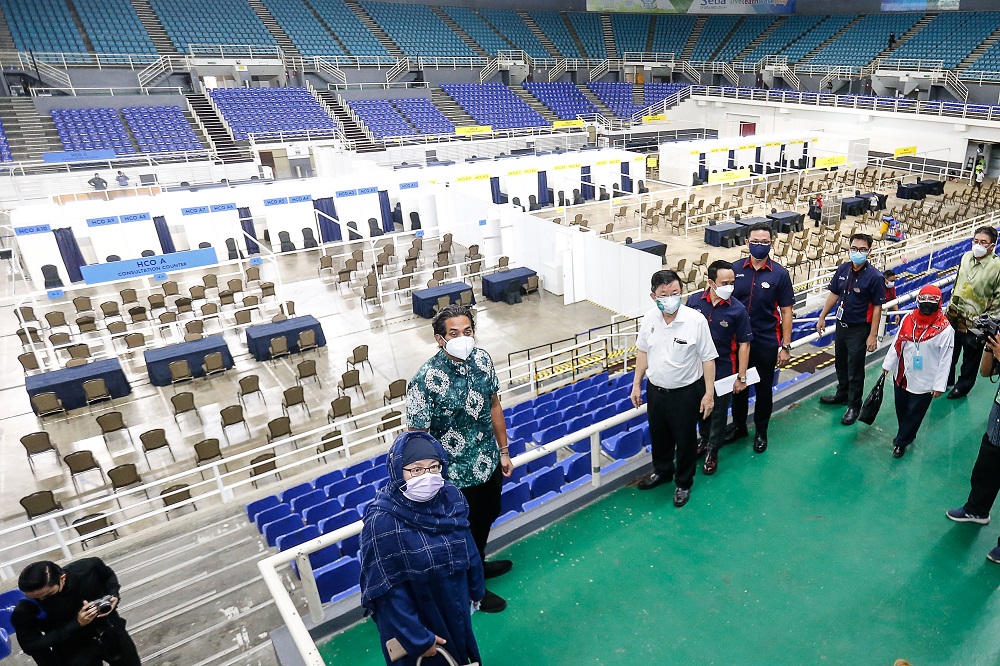 June 3 – Mass Covid-19 vaccination centres will be set up in Bayan Lepas and Batu Kawan in Penang specifically for factory workers in two weeks’ time.

“This is so that the factory workers, the economic frontliners, will be vaccinated as they have to work throughout the movement control order (MCO) and this will afford them with some protection,” he said during a press conference after visiting the newly set up Covid-19 vaccination centre (PPV) at Spice Arena here.

The PPV at Spice Arena here is the first mass vaccination centre in Penang and it is scheduled to start operations on June 7.

Khairy said the target is for between 1,000 and 3,000 AstraZeneca doses to be dispensed at Spice Arena daily.

“A total of 133,000 doses of AstraZeneca will be dispensed for the first round at Spice Arena,” he said.

The 133,000 doses are under the opt-in programme where those interested had signed up for it online once registration opened.

Khairy said the federal government will be speeding up the supply of Covid-19 vaccines to Penang from July.

“I will be discussing the schedule of the vaccine supplies that will be sent to Penang with the chief minister later,” he said.

As the supplies come in, he said the vaccination process must speed up as the vaccines must not be in storage for too long.

Therefore, more PPVs will be opened up in the state.

“Another mass PPV site to be opened in Penang next week is the Pesta Site in Sungai Nibong,” he said.

He said there are 60 private clinics and six private hospitals in Penang that are ready to be opened as PPVs.

Of the six private hospitals, three will start operations as PPV on June 7.

On a proposal for a drive-through PPV at Universiti Sains Malaysia (USM) here, Khairy said he will need to visit the site to assess the suitability first.

“There are certain conditions that must be met for drive-through PPVs as there needs to be space for them to park for observation for at least 15 minutes after getting their jabs,” he said.

He said they must ensure it would not cause congestion and traffic obstruction.

Meanwhile, Penang Chief Minister Chow Kon Yeow, who was also present, said he hopes that with more PPVs opening up, the state will be able to achieve herd immunity by October.

He suggested that Khairy consider giving tentative dates to those who have registered for vaccination.

“Maybe not the appointment dates but tentative months that they will be vaccinated so that people are prepared and more confident with the vaccination programme,” he said.

Khairy responded that they will consider this proposal as it was a good suggestion.

“We can consider this, maybe can give tentative dates of when they can get their appointments,” he said.

On the progress of the National Covid-19 Immunisation Programme, he said a total 3.2 million doses were given out in the 100 days since the launch of the programme.