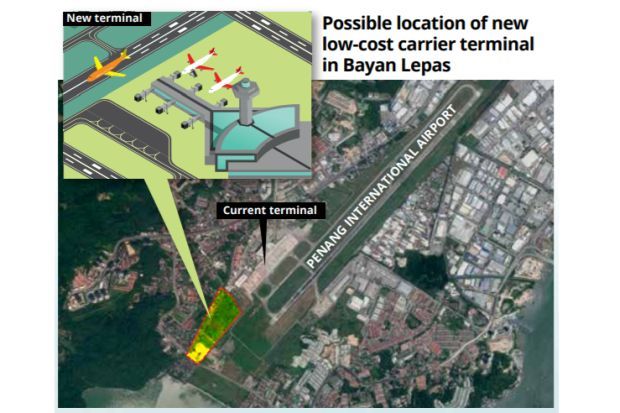 GEORGE TOWN: If Penang gets a low-cost carrier terminal (LCCT), it will likely be to the south of the current passenger terminal and only about 1km from the proposed islands to be reclaimed off the southern coast of Penang island.

It has been the dream of AirAsia and the Penang government to have the facility since 2007.

An inside source in AirAsia revealed that former chief minister Tan Sri Dr Koh Tsu Koon had given approval for AirAsia to build the LCCT on a 36ha piece of land at the coastal end of Penang International Airport in Bayan Lepas.

“But it met with resistance from the Transport Ministry then due to political reasons, and also because the plan was for the LCCT to be privately run, instead of by Malaysia Airports Holdings Bhd (MAHB).

“AirAsia was planning to make high-volume, short-haul flights to China and India from there.

“Now that there are new levels of political cooperation between the state and federal governments, it will be interesting to see if the 11-year dream can come true,” the source said.

The project was highlighted at the state assembly yesterday when Air Putih assemblyman Lim Guan Eng, who is also Finance Minister, hailed the move to have a new LCCT for Penang while debating the motion of thanks to the opening speech by Yang di-Pertua Negri Tun Abdul Rahman Abbas.

Lim, speaking to reporters outside the august Hall later, said: “We are not talking about expanding the present terminal but a totally new one that will use the same runway.”

The former chief minister said Putrajaya would talk to Air­Asia and MAHB on the LCCT plan.

“While AirAsia is very much interested to help, we still need to work out the specifics of the plan,” Lim said.

He said a solution was needed be­­cause the present airport in Bayan Lepas only has the capacity to handle 6.5 million passengers a year but arrivals last year hit 7.1 million and the number was expected to increase to 7.8 million this year.

Former Jelutong MP Jeff Ooi recalled that the LCCT plan was proposed in 2007 and said if it had been done 10 years ago, Penang would have had a different future.

“Penang is well positioned to be a regional hub for international tra­vellers who fly low-cost.

“Tourists who arrive on full-­service airlines will have plenty of options to travel elsewhere on low-cost flights. So this makes Penang attractive as a prime point of visits for tourists,” he said.

“A new terminal will help us increase our planes from five to 16 over the next five years. This will bring in about eight million more passengers per annum into Pe­­nang,” he said after a courtesy call on Chief Minister Chow Kon Yeow.

He added that the plans would feature both domestic and international routes.

The current Penang International Airport is the oldest in the country, having been built in 1935 when Pe­­nang was part of the Straits Settle­ment in South-East Asia ruled by the British.

It underwent a major upgrade in 1979 to accommodate Boeing 747s, then the largest planes in the world.

The terminal saw two significant facelifts in 2009 and 2013.