Nov 8 – It is an open secret that Inari Amertron Bhd, the country’s largest outsourced semiconductor assembly and test (OSAT) player, has been heavily reliant on US chip giant Broadcom as its major customer.

Research analysts and industry watchers have, over the years, pointed to the high single customer concentration risk. The optimists, however, counter argue that Broadcom would not simply seek an alternative OSAT provider as Inari has consistently proven its capability, reliability and cost efficiency.

To put it another way, Inari and Broadcom, which is a key component supplier of smartphone maker Apple Inc, have built a long-term business relationship and developed strong mutual trust throughout the years.

But like it or not, such a strong connection also makes Inari shares vulnerable because whenever Apple or Broadcom sneezes, the company would catch a cold.

About two weeks ago, Inari announced that the group had signed a memorandum of understanding (MoU) with Shanghai-based China Fortune-Tech Capital Co Ltd (CFTC) to carry out OSAT-related businesses in China. 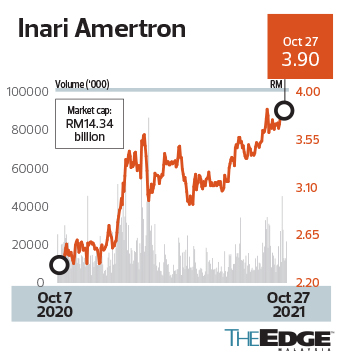 Certain quarters went as far as to say that Inari has decided to semi-officially hedge its bets amid the US-China trade war. But is that really the case?

Under the MoU, the new joint-venture (JV) company is to be capitalised at RMB1.71 billion (about RM1.11 billion), whereby Inari is to contribute 100% equity shares of its wholly-owned Amertron Technology Kunshan (ATK), as well as RMB463 million (about RM299 million) cash.

Money shouldn’t be an issue for Inari, which raised RM1.03 billion from a private placement exercise, completed at end-July. The placement shares were issued at RM3.10 apiece.

Meanwhile, CFTC will contribute RMB749 million cash and RMB21 million in the form of the entire equity of Yiwu Semiconductor International Corp. Of the new JV, Inari will own 55%, and CFTC the remaining 45%.

CFTC is backed by Semiconductor Manufacturing International Corp (SMIC), the largest and most advanced pure-play semiconductor foundry in China.

A CEO of a semiconductor-related firm observes that Inari’s presence in China is relatively small compared with its OSAT peers such as Malaysian Pacific Industries Bhd (MPI) and Unisem (M) Bhd.

“Inari is now trying to jump-start its expansion in China through this JV. The general consensus view is that China’s semiconductor market will be huge and, therefore, all the OSAT or automated test equipment (ATE) players cannot afford to miss out,” he tells The Edge.

The CEO observes that having SMIC as a related partner is definitely a plus point for Inari. “I would imagine some of the test and assembly jobs can be passed on to this JV. I think it makes sense to go with SMIC,” he says.

A managing director of a semiconductor equipment maker tells The Edge that Inari’s primary objective is to expand and try to keep on par with its peers in the China market.

“I don’t think Inari is reducing its dependency on Broadcom. Of course, getting a bigger customer spread is a good risk-averse measure. With the intense competition in China’s OSAT business, I think Inari is trying to reduce the competition risks by teaming up with a JV partner that is backed by SMIC,” he explains.

The managing director acknowledges that the profit margins of OSAT players will remain tight. Fortunately, he says, the ongoing global chip shortage means these companies will continue to make good profits in the next two to three years.

“However, long-term sustainability of good margins will pose major challenges to OSAT as operating costs may not be low in China nowadays,” he warns.

Inari saw its net profit more than double to RM330.47 million in the financial year ended June 30, 2021, against RM155.75 million a year ago. Group turnover increased 35% year on year to RM1.428 billion in FY2021, up from RM1.058 billion a year earlier. Its stronger financial performance was attributed to higher revenue growth in the radio frequency (RF) business segment.

A check of Inari’s annual report 2021 shows that Singapore remains the largest geographical market, counting for 86% of group revenue, followed by Malaysia (7.5%) and China (6%).

Although Inari does not publicly reveal the extent of Broadcom’s contribution to its sales, most equity analysts and industry observers usually assume that a large chunk of the group’s revenue from Singapore is actually derived from the American fabless chip vendor, which operates its Asean sales office in the island state.

“We remain upbeat on the ongoing fifth generation (5G) network rollout across the global cities and commendable 5G smartphone sales by Broadcom’s key customer,” he wrote in a research report dated Oct 20.

PublicInvest Research maintains an “outperform” call with an unchanged target price of RM4.75 based on 45 times CY2022 earnings per share (EPS).

HLIB Research analyst Tan J Young views this development positively as the JV is expected to reinvigorate ATK, while CFTC is a strong partner, which, in turn, will lower Inari’s risk of doing business in China. Moreover, the China semiconductor market will be supported by over US$150 billion in investments from the government (from 2014) through to 2030.

“We strongly believe that the iPhone 5G super cycle will continue while the optoelectronic division is expected to improve with more customer diversifications and partnerships,” J Young wrote in a research note dated Oct 20.

Kenanga Research analyst Samuel Tan believes that Inari was identified by CFTC due to its excellent track record in the OSAT space and its capabilities, which often attract large multinational corporation (MNC) customers.

“Using the group’s existing facilities in ATK, the new JV will be able to accelerate the qualification process for new customers before moving into a new plant when the need arises,” he wrote in a research report on the same day.

While Inari has yet to provide further information on its potential customers and products involved in the new JV, Samuel opines that it is likely related to the optoelectronic segment, mainly in the automotive space, which is in line with the expertise in its Kunshan plant.

Rakuten Trade Research Team points out that Inari’s latest move is in tandem with the company’s goal to broaden its revenue stream and to ride on China’s ambitious plan to achieve self-sufficiency (currently 16% versus its 70% target) in the semiconductor industry.

Similarly, Kenanga and Rakuten have an “outperform” recommendation and “buy” call respectively, and target price of RM4.80, based on 40 times FY2022 PER.

Year to date, shares in Inari have gained 43%, to close at RM3.89 last Thursday, which translates into a market capitalisation of RM14.34 billion. The counter is currently trading at a historical price-earnings ratio (PER) of 43 times. In comparison, both MPI and Unisem are valued at about 33 times.

Main Market-listed Insas Bhd — controlled by low-profile businessman Datuk Seri Thong Kok Khee — is the single largest shareholder of Inari with a stake of more than 14%. Another two substantial shareholders are Kumpulan Wang Persaraan (Diperbadankan), or better known as KWAP (8.8%), and the Employees Provident Fund (6.8%).