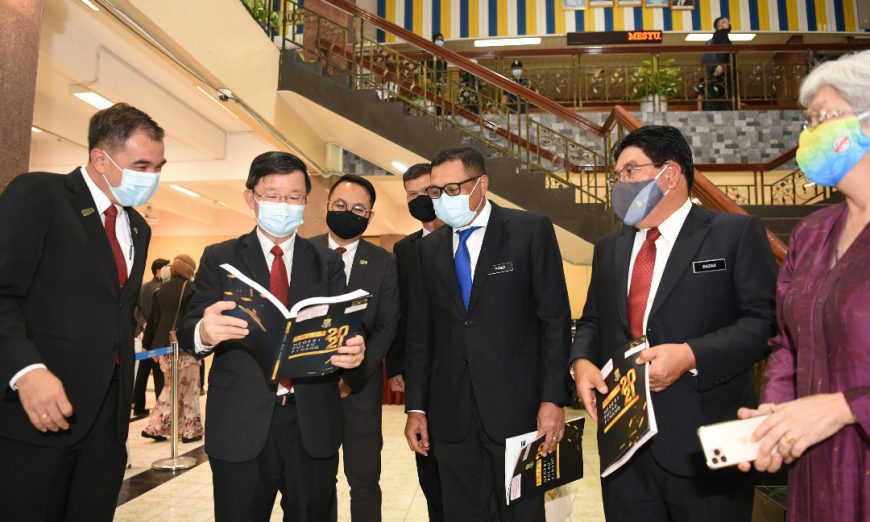 Oct 12 – The Penang government has underlined four strategies to empower the state’s economic recovery under its Penang 2021 Budget.

Chief Minister Chow Kon Yeow said the four strategies were to encourage investment and increase productivity as drivers of economic growth, to develop digital infrastructure and digital community towards sustainable resilience, to strengthen and improve the people’s quality of life, and to empower roles, talent and human capital.

“The state government is allocating RM96.13 million for the Drainage and Irrigation Department (DID) to implement high impact flood mitigation projects in 2021. The projects include the deepening and repairing of rivers, agricultural drainage and irrigation, flood mitigation projects, development of beaches and river corridors, environmentally friendly drainage systems and reservoirs.

“We are also ensuring that the welfare of the people is protected. Hence, the Penang government is apportioning RM50 million for the continuation of the welfare programmes under the state’s iSejahtera.

“The Penang government will continue with the Mutiara Foodbank programme and is allocating RM300,000 for that purpose. The Mutiara Foodbank programme benefits the less fortunate community via the collection of excess food from hypermarkets and redistributing them to the targeted community. The programme, which was introduced in 2017, has managed to save over 890 tonnes of excess food and benefitted 40,445 recipients as of July this year,” he said when tabling the Budget during the State Legislative Assembly in Dewan Sri Pinang today.

The state government is committed to preserve and dignify Islam as the official religion of the state.

Chow said that a sum of RM64.16 million has been allocated for the development, repair, maintenance and equipment of religious institutions in Penang.

“A few mosques will be built and upgraded in 2021. Among them are Masjid Habib Almas in Tanjung Tokong, Masjid Sungai Nibong Besar in Bayan Baru, Masjid Permatang Bogak in Kepala Batas, Masjid Bandar Tasek Mutiara in Simpang Ampat and Masjid Taman Pelangi in Juru,” he said.

“Besides that, the state has also allocated RM4 million to be given as financial aid to students who are pursuing higher education programmes in public institutions and polytechnic institutions in Malaysia,” he said.

For the implementation of non-Islamic affairs development programmes, the Penang government is setting aside RM300,000.

The state government also emphasised on the development of infrastructure.

“Investment in infrastructure is significant in providing positive impact to the development of the state and the economic growth. The state is setting aside RM31.98 million for the construction and upgrading works of roads and bridges in Penang,” he said.

“PBAPP has identified 10 projects with a total cost of RM10.5 million. The cost of six more projects is still being determined by PBAPP,” he said.

“The estimated allocation needed for the programmes is RM2 million,” he said.

Chow conveyed the state’s utmost appreciation to the frontliners in combating the deadly Covid-19 pandemic.

“We are thankful for the sacrifices our civil servants have made for our state. They are the backbone of the Penang government.

“The achievements which the state had gained until today would not be possible without the support and commitment from the civil servants.

“A total of 4,009 civil servants in Penang will receive a half-month year-end special financial aid or a minimum of RM1,000. The aid would be disbursed in December this year (2020).

In addition, the Penang government has allocated RM898,900 in financial aid for supervisors and KAFA teachers, religious schoolteachers, staff and teachers of private Chinese schools, guru tahfiz, guru pondok and guru TADIS. The aid would also be distributed in December this year.

Chow said the total projected operating expenses for 2021 was RM909.82 million, while the expected revenue was RM506.02 million.

“The deficit Budget of RM403.8 million will be supported by the state’s consolidated savings (reserves) of RM1.07 billion as of 2018 year-end,” he said.

Chow added that the projected state’s development Budget for 2021 was RM294.1 million.