Electronic industry is not slowing down 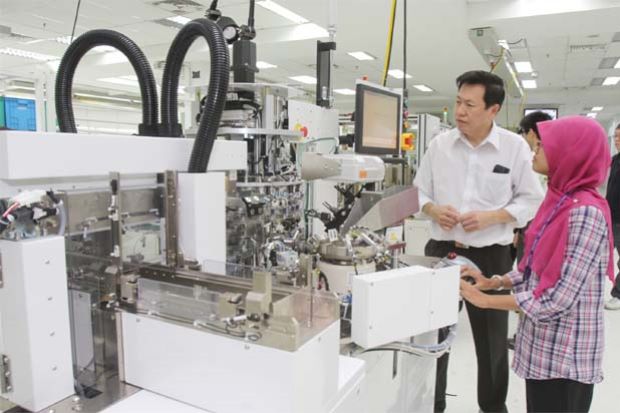 Since the introduction of mid-range smart phones and Internet-of-Things (IoT) devices and the adoption of electronic functions into the automotive industry, growth has steadied, Chuah said.

“The growth was supported by demand from the new generation cars and the high demand of power electronics devices in the hybrid and electric vehicle (EV) car control system.

“We noticed the trend three years ago and started to develop test equipment for testing automotive sensors,” Chuah said.

The contribution from the automotive industry will be about 15% this year compared to less than 10% in 2017, said Chuah.

“The group delivered about 50 test-equipment with a value of more than RM20mil to the auto industry, which is more than 10% of the RM200mil worth of orders we have received in the first half.

“In the second half, there would be another 70 test-equipment with a value of more than RM30mil that needs to be delivered to the automotive customers,” he said.

According to Chuah, the group is now negotiating with electronic component makers about relocating to Malaysia.

“Penang is one of the top destinations in Asia after Korea, Taiwan, and Japan known for its test-equipment,” he added.

The US-China trade war is also expected to have a positive impact on the industry as Chinese manufacturing companies explore production and shipment from Malaysia to avoid the hefty import duty imposed by the US on China-made products.

“The scarcity of electronic components has become more acute this year, impacting the supply to the consumer electronic and industrial electronic segments. We have to source in the open market now, as our distributors are out of supply.

“The price of components has soared a hundred times due to the supply situation,” he added.

According to a Market Research Future report, automotive smart display market is expected to reach US$9.78bil by the end of 2023, growing at a compounded annual growth rate (CAGR) of 12.56%.

“The growing popularity of smart display in the automotive industry to enhance safety technologies and to provide wireless connectivity is driving the demand for semiconductors, integrated circuits and printed circuit board assembly (PCBA) products, popularly also known as electronic motherboards.

“Asia-Pacific, in particular the economies of China and India, is expected to dominate the smart display market for automotive during the forecast period.

For this reason, the contribution from the group’s automotive business segment has grown over the past two years.

“We supply electronic motherboards and cables to the automotive industry. We expect the contribution to be even more significant over the next two years,” Mui says.

On the impact of the US and China trade war, Mui said the group is now in talk with a few China-based producers of electronic components who expressed interest to engage PIE to produce for them.

“If they produce and ship from China, their products will face a hefty import duty on entering the US.

“We are, however, selective about producing for them. We will only pick customers with value-added electronic components that could yield a reasonable margin, and which require minimal labour for the production process.

“We hope some of the deals can be sealed in the near future so that they can contribute in 2019,” he added.

“Mid-range smart phones and devices, IoT products, the next generation of smart televisions, which are a breakaway from 4K and 8K resolution, and the roll out of 5G infrastructure will drive the growth of the electronic and semiconductor industries.

“Our smart sensors and laser modules to the automotive sector are expected to drive revenue and profitability.

“We are hopeful that the automotive sales contribution will generate 10% to 15% segment of the group’s revenue by 2020 from less than 3% presently,” he added.

According to Heng, the US-China trade issue would benefit Malaysia. Globetronics has received enquiries from potential Chinese manufacturers interested to engage with Malaysian manufacturers to produce for them.

“Any relocation or transfer of manufacturing operations to Malaysia will benefit our local electronic and semiconductor players,” Heng said, adding that Globetronics is now talking to two potential companies.